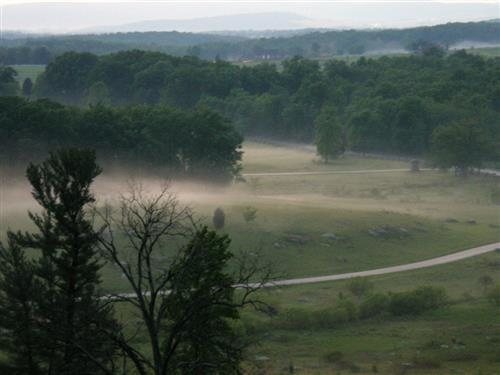 The Gettysburg Battlefield is a historic place where the Civil War occurred. When the land was battleground in 1863, it resulted in 51,000 casualties and thousands more were injured. It's a place visited for its history, but also for its haunts. It is believe to be one of the most haunted places in Pennslyvania.

Paranormal teams have detected what appears to be a Union soldier walking into the woods and disappearing suddenly. Others account of sightings of ghost soldiers and sounds of battle including guns and cannons firing.

Many claim ghost sightings are most commonly encountered in the period buildings, including the Farnsworth House Inn, the Jennie Wade House, and Gettysburg College. Devil's Den is also believed to be haunted by soldiers of battle from the second day of the Battle of Gettysburg. The hill was used by snipers during battle and because of its layout snipers were able to hide behind rocks for a sharp shoot. Those who perished here did not find a final resting ground and therefore many believe their souls did not find peace, resulting in the hauntings. After battle a cameraman and his assistant also took it upon themselves to move some of the dead men for better shots. Now those who visit may experience their camera and other electronic devices malfunctioning or photos developing with the presence of apparitions or blackness.