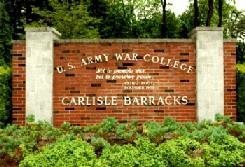 Carlisle Barracks is a United States Army facility that was attended by Dwight D. Eisenhower and John J. Pershing. It originally began as a post back in the 1700's and it is said that the area is haunted by ghostly band music, tunes from around the turn of the century. It is also believed to be haunted by Jim Thorpe, the school's star athlete who has been heard playing basketball in the Old Gymnasium at night. His apparition has also been seen at the Letort View Community Center along with other spirits: a man wearing farmers' clothes and a female student who is well-dressed. Hessian soldiers are rumored to haunt the Powder Magazine Museum on campus, and a ghostly woman wearing old-fashioned green wanders in and out of homes along Barracks' Flower Road. At the Washington Hall Guest House, there is an invisible baby who has been heard crying, and in one residence, a framed print of Civil War Major General J.E.B. Stuart was suspected to have been broken several times by a spectral Union soldier.

Share Your Experience or Comments - Carlisle Barracks
Get More Info